Soon, new and larger quarters were in order. New equipment was added, and not long thereafter, the company outgrew its building again. In 1969, Stoughton installed the first dual installation of Heidelberg's new S-Line presses, two SORMs. Not only were these presses of the highest quality and speed at the time, they were also versatile enough to print cover slicks for record albums—the outgrowth of fine service to the recording industry—as well as record label backgrounds.

In 1972, the company moved to the City of Industry and added a new two-color Heidelberg 29˝ press (SORMZ). As the record printing market continued to grow at an accelerated pace, more employees were hired and additional equipment was purchased. Requiring more space again, Mr. Stoughton purchased the land just north of the company and built a new plant better suited to its needs. Stoughton Printing Co. settled into its new home at the current address in 1978, adding another new Heidelberg press, this time a 40˝ two-color SORSZ.

Other equipment was added or replaced throughout the ensuing years, and to keep ahead of the industry, Stoughton's first multiunit press was installed in 1983. The press, a Heidelberg 29˝ four-color (72V), helped the company venture into other markets, from the fledgling video industry to commercial accounts.

1985 marked another first, with the company's installation of a Heidelberg four-color 40˝ press with a tower coating unit. This 102V+L was the first such press delivered by Heidelberg outside of the European market. This press ushered in the present era of aqueous coatings in the printing industry.

In 1986, the four-color 40˝ yielded its place to a Heidelberg 102S+L, a six-color 40˝ with coater. This press was followed in 1989 by the acquisition of a Heidelberg five-color perfector with coater. The new 102FP+L opened up many new markets to Stoughton Printing, including compact disc packaging, full color books and catalogs, and other commercial materials for our steadily growing customer base.

With rapidly changing markets to service and new technologies to acquire and adapt, it became time to expand the facilities again. Following major construction, a new two-story office building now houses the sales, production and management teams. The old offices were gutted and removed to make way for a state-of-the-art platemaking facility and an expanded, climate-controlled pressroom. The changes to the pressroom were especially important, for the old 72V warhorse gave way to Stoughton's acquisition of gray German iron, a Heidelberg Speedmaster 74-6-LX. This new press is a high speed six-color 29˝ with coater, extension, and automation.

Stoughton Printing Co. is technologically ready, organized, and operationally poised to meet and exceed the needs and demands of its customers. 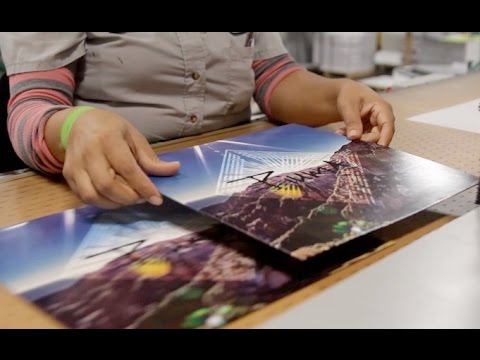